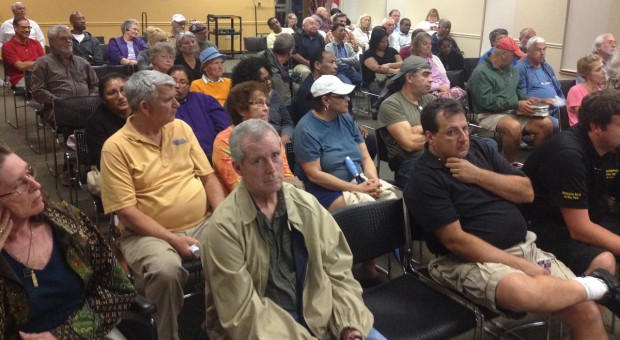 We turned out a great crowd of citizens at the March 24 meeting about getting the Ruskin Community Plan’s Guidelines written into the Land Development Code (LDC) in order to close the recently discovered loophole which allowed a developer to bypass this integral part of our Community Plan. Over 60 people signed in, on a rainy Monday evening!

Now we need to send in LOTS of citizen comments (see sample email below) insisting that the county revise the draft amendment so that the Community Plan’s Guidelines can be enforced as the community intended. Developers from all over the county are certainly commenting, so it is vital that the county receive plenty of citizen input as well.

The first draft of the Ruskin Guidelines code amendment is totally useless, as noted by several citizens who spoke up at the meeting (to great applause), because it makes it ridiculously easy for a developer to get out of complying with the Guidelines at all. We need to tell the county to revise this draft, before this goes to the County Commission Workshop on April 8 (then to the public hearing on April 24).

This issue is important for ALL Community Plans — not just Ruskin’s.

Here is a sample email
copy & paste or see more details below and write your own letter.

On March 6 the County Commission directed staff to codify the Ruskin Community Plan’s Guidelines into the Land Development Code (LDC). However, the draft language of LDC amendment #14-0474 fails to fulfill this promise made to the Ruskin community.

Section 3.22.03-C of the draft lets a developer choose not to comply with the Guidelines as long as they comply with the small bit of the Ruskin Plan’s Vision Statement quoted in Section 3.22.03-A of the amendment — which is already required anyway, because the Plan’s Vision Statement is already in the Comprehensive Plan. In a nutshell, this Land Development Code amendment says:

The Ruskin Community Plan intended that new development should comply with BOTH the Vision Statement AND the Guidelines, but this amendment lets a developer choose to comply with only ONE — the Vision Statement. The Vision Statement provides a brief, general neighborhood character description, while the Lot Size & Density Guidelines specify the scale and type of residential development for each area. BOTH are essential features of the overall character of the neighborhood, and BOTH are supposed to apply. Moreover, the general one-sentence description of each neighborhood was never intended to be a substitute for the Guidelines; and fitting that one-sentence description is in no way indicative that a developer has met the intent of the specific Guidelines. Simply put, developers should not get out of complying with the Guidelines by complying with some other part of the Plan.

Please revise this draft amendment to firmly re-instate the Guidelines into zoning regulations, with no new loopholes, using language such as this:

If a proposed re-zoning does not meet the guidelines in Figure 2, the applicant shall demonstrate how the proposed development is otherwise consistent with both:

This wording would ensure that an applicant who is not meeting the letter of the Guidelines must show how he’s meeting the spirit of the Guidelines — i.e, the desired scale and type of residential development — in addition to demonstrating consistency with the spirit of the Vision Statement’s description of the neighborhood character (which is also in the Comprehensive Plan).

Change name to: “Guidelines for Scale & Type of Residential Development”

This name would clarify the distinct purpose of these Guidelines: to review the scale and type of development, as a separate, essential feature of the overall neighborhood character.

I hope you fix this — hopefully before it is presented at the BOCC Workshop on April 8, but if not before, then at that workshop.

Land Development Code amendment #14-0474 draft
This is short and easy to understand — 1 page of text, 1 map, 1 table of the Guidelines.
Page 1, last section 3.22.03 C (1 sentence) says a developer can get out of the Guidelines if they merely show that their development is consistent with the “character of the corresponding neighborhood area as described in this Section” — but the only thing “in this Section” describing the “character of the corresponding neighborhood area” is one vague sentence for each of the 4 neighborhood areas in section 3.22.03 A. This is nowhere near enough to ensure that a development meets the intent of the Guidelines. AND that one vague sentence for each neighborhood is already in the Comprehensive Plan, so developers already must comply with that — with or without this LDC amendment — whether they comply with the Guidelines or not!

My detailed comments on the draft amendment, with suggested language to revise it
Feel free to copy & paste from this, or use the shorter sample letter above.

All Land Development Code amendments, plus the schedule of hearings and other info
Scroll down to #14-0474 — the one about Ruskin’s Community Plan Guidelines

A note on the Guidelines in relation to Ruskin’s Community Plan:
The rest of the Ruskin Community Plan is securely written in the Comprehensive Plan, but the Guidelines is a critical component that was not written into the Comprehensive Plan explicitly, but only linked by reference — and now the county attorney has determined that they were not properly referenced as the community was told they were by county staff. This is the legal loophole that was used by a developer to get out of the Guidelines, which is why they need to be explicitly written into the Land Development Code.

Thanks for all your participation!