Photos from the Women’s March

I marched with over 20,000 women, men & children in the Women’s March in St. Pete — one of the many sister marches around the country that marched simultaneously in solidarity with the marchers in Washington, Jan. 21, 2017. The experience was uplifting and encouraging. It was pure grassroots activism, complete with home-made signs and hand-knitted pink hats. Everyone was having a great time, lifting each other up out of our post-election blues.

The mission of the march was “To create an inclusive community regardless of gender, race, nationality, faith or sexual orientation for a common vision of freedom, equality and social justice.”

I created, designed and pasted my sign together for the Women’s March, using a photo of the Statue of Liberty by Michael Jones (aka smokeghost). After the march, I went to his Flickr page and thanked him for making his photo available, and showed him how I had used it, and told him I had also made a copy of my sign for a friend who marched with it in Washington, DC. Happily, he replied that he was pleased to see his photo used this way. 🙂

Here are a few snapshots from the St. Pete march: 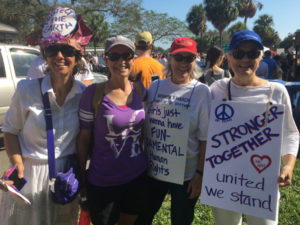 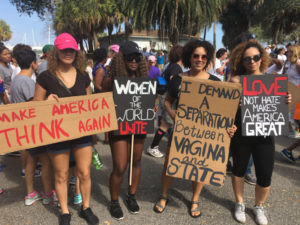 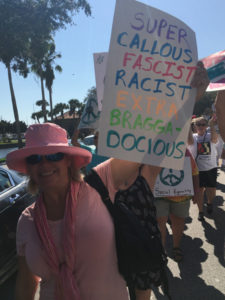 Many signs made me smile 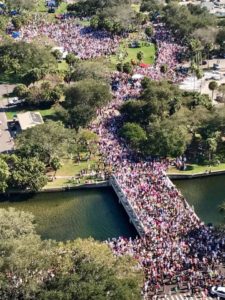 Aerial view of the start of the St. Pete march

A wide shot of the crowd

And here’s a little video, to show a bit of the spirit of the event:

Pictures from Women’s Marches around the world — New York Times

Aerial video of the Washington March

Aerial Video of the St. Pete March — You can see a mass of marchers at Demen’s landing, then a ton of marchers filling the street from Demen’s landing to the Vinoy, and just when the camera begins to turn back, you can catch a glimpse of MORE marchers, heading back up Beach Street from the Vinoy to Demen’s. for some time, both streets were full of demonstrators.