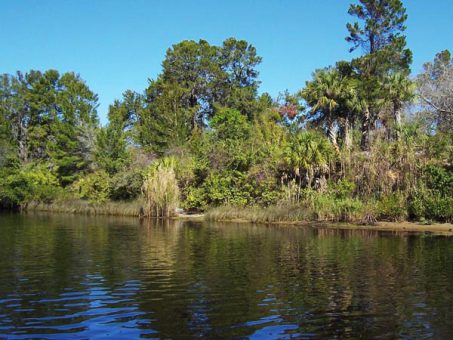 Thanks to citizen activism, Chris’s Plumbing has withdrawn their application for a sewage effluent dump on the banks of the Little Manatee River’s wetlands.

This is a big victory for all of us who worked to defend the little Manatee River from this toxic pollution!

Enjoy your Thanksgiving week, with no public hearing!

(See my previous post for details of how this stinking project would have polluted our river with 100,000 gallons per day of dangerous toxic waste.)

If it wasn’t for the citizens who spoke out against this to our County Commissioners, Chris’s Plumbing’s original plan would be in operation right now — they would be dumping 50,000 gallons per day of raw sewage from septic tanks, porta potties & commercial sludge on the site which includes large wetlands that flow right into the river.

Because of our strong opposition, they were forced to modify their plan to remove the solids before spraying the effluent on the site; doubling the amount, however, to 100,000 gallons per day. They hired an expensive PR firm to try to convince us this would be fine, but we weren’t fooled — it was still dangerous for human health and toxic for the river (see why in previous post) — and we continued the fight.

Why did they withdraw? Several factors may have been considered:

I hope our fight has convinced them that they cannot win on this site, or on ANY site that would impact wetlands or other sensitive natural resources, and so they should find another site to start with. I hope we have also convinced them that they need to process their waste (somewhere else) in a way that is at least as clean as the county’s own processing plants — or dispose of their waste in the city’s plant.

If they do bring this back, our efforts have won us several advantages:

Another big win for us is that the County Commission heard our concerns and has now banned the process of land application of sewage anywhere (except for the 2 or 3 plants currently operating which are grandfathered in). We can thank Commissioner Stacy White for proposing this, and Commissioner Pat Kemp for working really hard on it. This only prohibits spreading solid waste on the ground, like Chris’s Plumbing originally proposed. It does not prohibit effluent spraying, like Chris’s Plumbing finally proposed. Hopefully the county will consider regulating effluent spraying now.

One of my favorite things about being involved in efforts like this is that I get to meet and work with such great people: people who care about our community & our environment, and are willing to work together to protect both. Thanks, again, to all of you!