The Ghost Orchid is worth the drive

Breathtakingly beautiful, and breaking all the rules, the phenomenal Ghost Orchid of Corkscrew Swamp is in bloom right now within a couple hours’ drive of Tampa. The flowers are only expected to last until Tuesday, so if you want to catch this extraordinary sight you’d better hurry.

The endangered Ghost Orchid is exceedingly rare, but the blooms are even rarer as most plants go years without flowering at all. When they do bloom, it is typically with only one, or at most two flowers in midsummer. Amazingly, this Corkscrew specimen bloomed 3 times last year, first with 12, then 10 and finally 3 flowers. Last weekend, when my husband & I saw it on the 4th of July, it had 5 magnificent hand-sized blooms and 3 plump buds. 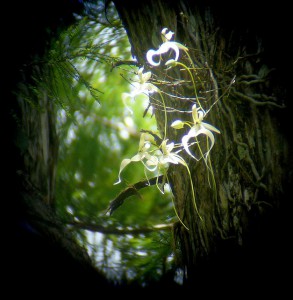 I took the photo at right through the park’s spotting scope on the boardwalk. The orchid is growing on a 400- to 500-year-old Bald Cypress tree, much higher than any other Ghost Orchid is known to grow. It’s also growing much farther north than this plant was previously thought to venture

Most people never get a chance to see a Ghost Orchid because they only live in a small area of south Florida and Cuba, and in Florida they’re buried deep in a few hard-to-reach swamps of the Everglades.

Although this incredibly robust specimen is 30-35 years old, and visible from the park’s well-traveled boardwalk, it was only just discovered last summer when it bloomed like crazy. When not in bloom, Ghost Orchids are difficult to spot as they have no leaves at all — just some greenish-grey roots, hugging flat against a tree’s bark. The plant is almost invisible until once in a blue moon, it extends a thin, nearly imperceptible stem, at the end of which a flower unfolds its fantastic white shape, floating in mid-air …like a ghost. 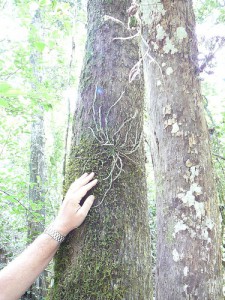 After viewing this orchid last week, my husband & I travelled south to the Fakahatchee Strand in the Everglades, where we waded into a thick sea of vicious mosquitos who suck DEET for breakfast. (They bit my eyelids!) We found a couple more Ghosts, including this one pictured at left, but none in bloom.

The wildness of the Everglades (bugs and all) is an integral part of its magic. Last time we were there, searching for the Ghost Orchid, we had an astonishingly close encounter with a bear that will always be a treasured memory.

Still, there’s much to be said for strolling along the Corkscrew Swamp’s boardwalk in your flip-flops (as opposed to slogging through the Everglades’ swamps in your boots) and coming upon a spotting scope all set up for you under the trees through which to view an endangered species. We needed no DEET on the boardwalk, but Corkscrew Swamp is no Disneyland — there’s plenty of wildlife and it’s an authentic experience of the splendor of a south Florida Swamp.

Call the sanctuary before you go (239/348-9151) if you want to make sure the Ghost Orchid is still in bloom. For location, hours & fees check the Corkscrew Swamp Sanctuary web site. Several hotels in Naples are offering special Ghost Orchid rates. Enjoy the beach and bring a good book: The Orchid Thief, a fabulous true story about the Ghost Orchid and south Florida’s essential outlandishness.