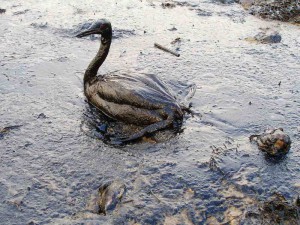 The current issue of Bay Soundings, “Tampa Bay’s Science and Nature News Journal,” includes a full-page message promoting oil drilling off Florida’s coasts and touting the safety(!) of offshore drilling. The previous issue also presented a missive supporting drilling done in a “safe and environmentally sound manner” within three miles of Florida’s coast. The Soundings — funded by public agencies directed by local elected officials — has not printed any perspective from anyone opposed to offshore drilling.

The pro-drilling folly was printed right before the recent Gulf oil-spill, but it was indefensible even then. The fact that these articles are made ludicrous by the recent ecological disaster in the Gulf makes it all the more important to examine how such pro-drilling propaganda can get promoted by these public agencies; for it is just this sort of propaganda that gives political cover to those who would bring drilling, with all its horrible impacts, nearer to Florida’s coasts — particularly when that propaganda is funded by public agencies with green-sounding names like the Tampa Bay Regional Planning Council (which includes the Agency on Bay Management), the Southwest Florida Water Management District (SWFWMD) and the Tampa Bay Estuary Program.

This issue’s piece by Frank M. Hughes, “who worked for 15 years in the petroleum industry,” is a fervent pro-drilling, anti-environmentalist position paper:

“drilling offshore Florida is the only rational course of action. We need to stop regurgitating and rehashing the same warmed over political clutter tossed out there just to prevent any kind of economic development and growth.”

Hughes complains that “the 1993 barge spill and the Exxon Valdez have been beaten to death,” and dismisses as “irrelevant” these examples of the fallibility of American oil industry technology. Then he discredits the example of offshore drilling’s dangers provided by a recent spill off Australia’s coast, by extolling American know-how and freedoms as “modifying factors,” arguing that “we can do it better” than anyone else in the world, and that

Oh, how I wish we American environmentalists were still speaking only hypothetically about a drilling-rig spill, similar to Australia’s, off our own beloved shores!

Hughes concluded that the environmental risks are “acceptable,” so let’s Drill, Baby, Drill!

Will Mr. Hughes retract his position now that he has been proven so horribly wrong by the Gulf spill? I doubt it, and I couldn’t care less. Here’s what galls me:

It is disingenuous for the Tampa Bay Regional Planning Council (TBRPC) to ostensibly refuse to take a position for or against drilling off our coasts, while printing and distributing this pro-drilling hype — especially without providing any counterpoint from those who would protect our shorelines by prohibiting drilling near our coasts.

Moreover, it is dissappointing that TBRPC (which includes the Agency on Bay Management and works closely with the Tampa Bay Estuary Program) decided not to take a stand against offshore drilling. They spent their last two meetings zealously adopting a resolution against the citizen-led referendum, Amendment 4 (Florida Hometown Democracy), so we know these politicians don’t mind taking a political stand and spending our money telling us how to vote. Yet this same council — which sponsors a publication about Tampa Bay — won’t take a stand against drilling that could ruin Tampa Bay. The action they do take is to publish this “Drill, Baby, Drill” boosterism, without even offering a counter-position.

The council decided not to take a position on offshore drilling after hosting a couple of forums, where they invited participants from the oil industry but pointedly excluded environmental advocates (they’re so emotional!). In Bay Soundings they printed 10 questions which should be “examined” before opening more areas around Florida to offshore drilling and its terrible impacts. As if there’s not enough data to decide whether or not to expose our fragile coasts to more of the horrific destruction now bearing down upon them. As if it’s logical to gamble with our coastal ecosystems & economy if you do NOT have all your questions answered. The best the TBRPC could do was to promise that

“the Tampa Bay Regional Planning Council and its Agency on Bay Management will closely watch progress and continue to urge full study of the potential impacts, both positive and negative.”

Right under that promise to continue watching the devastation of our environment, without standing up to protect it, they printed a lengthy pro-drilling statement from state Rep. Seth McKeel (R-Lakeland). And in their next issue, they printed the full-page Big Oil position paper. How can they pretend they are not taking a position when they are spending their resources (including our tax dollars and proceeds from the Tampa Bay Estuary Program’s license tag) publishing this “Drill, Baby, Drill” hype?

If we want Bay Soundings to be more environmentally responsible we should complain to our elected officials who sit on the boards of the agencies that fund this publication. These politicians puff up their resumes in their campaign brochures with the green-sounding names of these agencies, while allowing these agencies, under their direction, to print & distribute the anti-environmental message of the oil industry.

If you think that’s wrong (and hypocritical), tell your elected officials on the Tampa Bay Regional Planning Council, and your county commissioners & city council members directing the Tampa Bay Estuary Program. The Governor appoints SWFWMD directors, and some members of the Planning Council, so you could ask Gov. Crist to forward your complaints to them, while letting him know that you think his appointees should not use our agencies, and our dollars, against Florida’s coastal environment and economy.