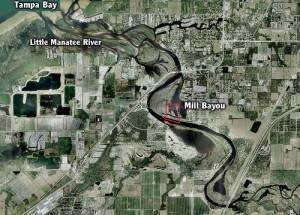 Developers want to kill 250 trees (half have trunks over 1 foot in diameter!) and bulldoze wildlife habitat, spoiling a breathtakingly beautiful part of the Cockroach Bay Aquatic Preserve, just to build eight houses where they don’t belong: on a fragile, skinny mangrove-lined sand-spit, sticking out into the middle of the Little Manatee River at Mill Bayou. (See map at right, and photos after the jump.) Of course they would dump truckloads of fill and pave a road over the riverine habitat in the process.

It’s hard to imagine a worse place to build houses than in the middle of the Little Manatee River — an undammed, dynamic, tidal river that floods frequently. This little spit (only 300 feet wide!) is sometimes completely underwater, and yanking out the trees and vegetation would only make it more vulnerable to storm damage and erosion. Building in tidal flood plains like this, in the Coastal High Hazard Area, puts families in danger and raises insurance costs for all of us.

The Little Manatee River’s mangrove islands and sand-spits are part of her natural ecosystem. They provide important riverine habitat and natural protection from storm impacts. This pristine river, designated by the state as an Outstanding Florida Water, is a regional asset, teeming with life, precisely because it has not been urbanized by development such as this. Yet.

Although our county planners recommended approval of the project (business as usual) as did a zoning hearing master (it’s what they do), the developers’ proposal was denied by the county commission a year ago (Hooray!), in response to opposition by Tampa Bay Sierra Club & local residents along with a timely editorial by the Tampa Tribune urging denial.

But the developers appealed the commission’s denial in court, where they won a do-over (remand). So citizens need to fight once more, to protect the Little Manatee River and her wildlife. If we don’t show up with a big crowd, commissioners could easily side with the developer this time.

What makes me worry that the commission might flip-flop on this? History: In their editorial urging commissioners to deny this current proposal, the Tampa Tribune reminded them of their reprehensible decision, in 2006, to let this same developer rezone the landward neck of this spit for 22 houses, noting, “The developer should be satisfied with the questionable approval it already has gotten.”

That “questionable approval” allows the developer to ruin part of the river’s shoreline, bulldoze the site’s rare sand pine scrub ecosystem, and dig up around 20 gopher tortoises and remove them from their homes, despite an eloquent plea from the National Humane Society and massive local opposition. Community opposition had first persuaded the county commission to deny that rezoning, but they overturned their denial later in a “Relief Hearing.” Citizens were outraged. (Here’s a map showing both the previous and the current rezoning proposals.)

In a grim rerun, this developer is again refusing to take “no” for an answer in their relentless push to extend destruction all the way out onto the rest of the spit — the part sticking farther out into the river — just to build eight more houses. And here’s a bad sign: As a special favor to the developers who are working to overturn their decision, commissioners expedited the process and moved this hearing date forward 6 weeks! Commissioner Al Higginbotham sounded eager to overturn his vote “so that this project can go forward.” (Jim Norman cast the lone vote against the board’s previous denial.)

I hope to see lots of people, and the media, show up again to encourage our commissioners to say “enough is enough” — and stick to it this time. We shouldn’t trade any more of these mangroves & pines for docks & lawns, nor trade this wildlife habitat for suburban housing. If you agree, join us to stand against wrong-headed development eating up our wild & green places:

Parking is easy in the parking garage, right across Pierce St. with an entrance around the corner on Jackson St. Bring plenty of quarters if you’d rather park on the street.

This is easy activism, and educational, too. Get your badge from us when you arrive, then sit and watch your county government at work, and try to look like a big crowd when we ask you to stand up and show the commissioners how many people are opposed to this development. Bring your friends and family!