Save the South Coast Greenway trail! 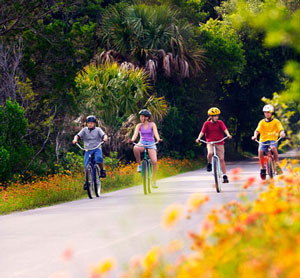 Please send letters (see sample letter below) & attend the hearing to save the South Coast Greenway: a multi-use paved trail planned to run from Ruskin to Tampa. Connected with side trails to Sun City Center, Apollo Beach, Balm, Gibsonton, Riverview, and other communities; and connecting several schools, libraries and shopping centers (see map); this trail would provide a safe system for alternative transportation — bicycles, skaters, baby-strollers, wheelchairs and pedestrians — IF we can persuade the Metropolitan Planning Organization (MPO) to get it built.

Our county’s 25-year Transportation Plan is being amended at a public hearing August 3. This is our only chance to get the South Coast Greenway built in our lifetime. Only 2 of the 6 segments are funded so far. We need the whole trail listed among the funded projects in the 2035 Plan.

The 2035 Long Range Transportation Plan spells out which transportation projects will and won’t get built in the next 25 years, within a $12-billion budget drawn from various federal, state & local sources, as well as contracts with developers, and funds from the proposed penny transit tax.

When the 2035 Plan was adopted on December 9, 2009, it included $9 million for this Greenway. (At that hearing we were asking for connecting bikeways on Shell Point & 19th to be funded as well. Those bikeways are now being added – Yay! – but much of the Greenway trail is being dropped in the proposed amendments.) The $9 million originally in the 2035 Plan for the South Coast Greenway was supposed to come from the new transit tax (the penny sales tax on the ballot this November), but they have since determined that the transit tax cannot be used to fund paved trails like this, and they dropped all funding from this project except for previously committed funding of 2 segments from other sources (the 1/2-cent CIT tax plus the Waterset developer’s commitment).

Two segments are not enough — we need all 6 segments funded in this 25-year plan, or we won’t see it completed in our lifetime. There is plenty of money in this $12-billion Plan for this Greenway — there is a $16-million SURPLUS in federal funds, and we only need $4 million to cover the 4 segments that are not already funded by the CIT tax and the developer commitment.

Please speak up for the South Coast Greenway. The MPO board must get this message from MANY of us, in order to move them.

• Write your MPO Board Members (see sample letter below).

•  E-mail these MPO Board members directly:

•  Also copy MPO staff member Beth Alden <aldenb@plancom.org> and ask her to distribute it to all MPO board members before the hearing.

Update: July 26 was the cutoff date for staff to forward your e-mail, so just send it directly to all the MPO Board members listed above. Also, I’ve corrected Joe Affronti’s e-mail above as of 7/27.

To: “MPO Board Members via Beth Alden” <aldenb@plancom.org>

Staff: Please distribute this letter to all board members of the MPO for their consideration prior to the Public Hearing on August 3.

As you amend the MPO 2035 Long Range Transportation Plan (at the Public Hearing on August 3) please make 2 changes:

(1) include all 6 segments of the South Coast Greenway multi-use paved trail in the “Cost Affordable” (funded) projects, and

(2) raise the priority of this paved trail into the top 20% of projects so construction can begin soon.

Our roads are among the deadliest in the nation for bicyclists & pedestrians. Safe biking & walking paths are imperative. With oil getting more costly and dangerous to obtain, our multi-modal transportation plan must include non-motorized alternatives, which run on infrastructure that is much cheaper to build & maintain than rail & roads.

There IS money available in the $12-Billion Plan for this Greenway trail — especially since the trail’s cost has gone down. When the Plan was adopted last December, it allocated $9 million for segments 1 – 4 of this trail. The proposed amendments only fund segments 1 & 2, even though new estimates (in Appendix E) now show the cost for all 6 segments is less than $8 million. Last December the Plan allowed $9 million for this trail, so surely there is still $8 million within the same $12-billion Plan — enough to build the whole South Coast Greenway Trail.

The Plan now has a $16-million SURPLUS in federal funds, and we only need $4 million of that to complete this trail. (Segments 1 & 2 are already funded with $2 million in county CIT funds and $2 million in developer funds. Segments 3 through 6 are listed as unfunded needs, with a total cost of $4 million.)

Please take an inclusive county-wide view, take note of the broad public support for this trail, and give the long-awaited South Coast Greenway a high priority and full funding within the MPO 2035 Plan.

Map of all Greenways and bikeways, built and planned

Please forward this message to anyone who wants a Greenway trail in south county!