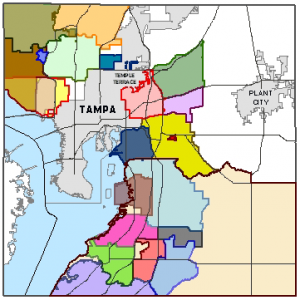 Citizens won fierce battles this week to protect community plans from developers who don’t want to have to abide by a community’s vision for how they should grow and which types of development should go where within their neighborhoods. Once a few influential lawyers began arguing that their clients should be allowed to “opt-out” of community plans, other landowners caught the fever and began asking to opt-out as well, threatening to tear scattershot holes throughout the plans.

County Commissioners Jim Norman, Ken Hagan & Al Higginbotham led the charge to ruin community plans during several hearings this summer, with Jim Norman saying he didn’t care if the plans turned into Swiss cheese. In July, two Community Plans (Brandon & Seffner-Mango) were approved by the county commission with several opt-out holes in them. The vote to approve was 5-2, with only Commissioners Rose Ferlita & Kevin Beckner voting against the opt-outs.

22 communities are in various stages of the community planning process, most with an adopted plan already. However, the board’s decision to allow opt-outs in 2 plans threatened to set a precedent for opt-outs to ruin all the other plans, and possibly even allow developers to opt-out of other parts of the county’s overall growth plan as well, since Community Plans are actually parts of that larger Comprehensive Plan.

Still, Commissioners Ken Hagan & Al Higginbotham turned a deaf ear to the pleas for sanity from the citizens and the planning agencies. While Commissioner Jim Norman was out of town (getting kicked off the ballot for selling out, and being investigated by the FBI) commissioners voted 3-2 on Tuesday to stop granting opt-outs on new plans, with Beckner, Ferlita & Sharpe voting to protect community plans, while Hagan & Higginbotham fought to let a handful of developers continue ruining the plans (White was absent).

In a show-down on Thursday night, the two plans that had been approved with opt-out holes in them came up for their final adoption hearings. Again, Hagan & Higginbotham fought against the communities, trying to get the plans delayed (at this last minute, after the citizens had worked for years to finish their plans) so they could begin working to change the community planning process to make it more developer-friendly before these plans were adopted. Again, many citizens and groups spoke up, asking the board to follow the county & state planners’ recommendations, as well as the wishes of the communities, and adopt the plans without opt-out holes.

Finally, Commissioners voted 4-2 to adopt the plans without opt-outs. Hagan & Higginbotham opposed the motion, voting for the special interests, while Kevin Beckner & Rose Ferlita led the board in voting for the citizens’ interests, joined by Kevin White & Mark Sharpe. The board room was packed with supporters of well-planned growth, and these groups were especially well represented: Seffner Community Alliance, Keystone Civic Association, United Citizens Action Network, and Tampa Bay Sierra Club.

Last night’s hearing provided a good look at the stark differences between Ken Hagan & Linda Saul-Sena, who is running against him for a countywide commission seat, as Saul-Sena spoke up from her background as a planner on behalf of the citizens, while Hagan fought for the developers who are contributing so heavily to his campaign.