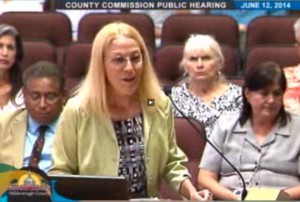 Citizen action won the day last Thursday when the County Commission unanimously approved the Ruskin Community Plan Guidelines amendment to the Land Development Code. A good-sized group showed up at the final hearing to demonstrate support of the Ruskin Plan specifically, and ALL Community Plans in general. Support was broad-based, including Ruskin residents, Sierra Club members, and Community Planning advocates from across the county. Speaking in support of the amendment were Sandy Council, President of the Ruskin Community Development Foundation; Kent Bailey, Chair of the Tampa Bay Sierra Club; and me, Mariella Smith. (Video here. For background see these previous posts.)

Thanks to all of you who have been attending meetings and emailing our commissioners about this!

If citizens had not acted, the Ruskin Plan’s Guidelines would still be in the trash can, where they landed several months ago when a developer insisted that they had never been properly adopted, and county staff quietly agreed to stop enforcing the Guidelines the way they had been doing for the 8 years since the Ruskin Plan was adopted. This had countywide ramifications: if one developer had gotten away with gutting the Ruskin Community Plan this way, it could have started a feeding frenzy of developers finding more “loopholes” in Ruskin’s Plan and in ALL community plans.

The fact that we found out about this change in policy after the fact—just by chance!—kicked off a furor that could have been avoided if we had been informed and included in these decisions impacting our Community Plan from the beginning. Instead, as people found out that this major change in policy had happened to our Community Plan, without any community involvement, the general reaction was that this was a serious problem of trust between citizens and our local government.

The good thing is that once citizens did find out about this, and did become involved, we got the problem solved quickly. The county worked closely with citizens—back & forth, through a couple of drafts—to include our input into this amendment. When the first draft was not strong enough, citizens kept pressing until we got an amendment that effectively implements the Guidelines.

This final amendment is not what county staff initially proposed, nor is it what citizens initially proposed. The final version is better than any of the initial proposals because it is the result of all of us working together.

It’s always good to thank the commissioners when they vote our way.

Dear Commissioners,
Thank you for adopting the Ruskin Community Plan Guidelines amendment to the Land Development Code (LDC amendment #14-0474) at the public hearing on Thursday, June 12. Special thanks for fast-tracking the amendment so that Ruskin would not be without this essential piece of the Community Plan any longer than necessary. Community Plans are necessary to direct development according to the vision of those who reside in each community. Please continue to support ALL community plans, in Ruskin and throughout the county.

Thanks to all who sent a message to our county supporting good planning that is citizen-driven (not developer-driven) for smart growth that fits into our communities, without overwhelming our roads and other infrastructure, while protecting our quality of life and our natural resources.

Wrap-up reports in the local newspapers:

The Observer News
The South Shore News (coming this week)