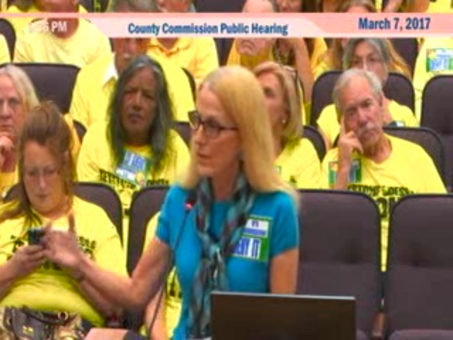 Citizens won a major battle against costly urban sprawl at a public hearing last Tuesday when County Commissioner Pat Kemp led the board to deny two proposed changes to our Comprehensive Plan. The proposals, by developer Stephen Dibbs, would have paved over rural areas with urban subdivisions, impacted wetlands, undermined community plans, and burdened taxpayers with the transportation costs that come with adding suburban commuters to far-flung rural areas.

If approved, these two proposals would have set terrible precedents of spreading urban densities outside the urban area, and seriously weakened our Urban Service Area boundary, which is our main planning tool for limiting urban sprawl.

Led by Keystone Civic Association, with Barbara Dowling Aderhold & Tom Aderhold, an overflow crowd of yellow-clad Keystone residents filled the County Commission chamber, and spilled out to fill a second area. Their many speakers were awesome: articulate, intelligent, and passionate about defending their community against developers’ assaults.

I spoke on behalf of Tampa Bay Sierra Club against the proposals. You can see my 2-minute speech in this video:

Our hero is Commissioner Pat Kemp, who made an excellent motion to kill these 2 proposals. Kemp, an attorney, skillfully crafted her motion to lay out evidence and reasoning that shuts the door on any further appeals. She gave voice to the citizens’ concerns, rebutted the developer’s claims, and showed her deep understanding of smart planning for growth & transportation, and her empathy for citizens and our community plans.

Kemp tossed aside the usual procedure of “transmitting” such Comp Plan Amendments to the state for rubber-stamping “review,” after which they come back for yet another hearing before the County Commission. This process wears out the citizens who have to leave work & families to attend hearing after hearing. Yet commissioners almost always do the red-tape transmittal thing, to postpone having to make a decision and to cater to the developers who propose this stuff. It was a mark of courage and leadership for Kemp to dispense with that SOP and simply kill these horrid proposals in one blow.

The 2 proposals in a nutshell:

Comprehensive Plan Amendment 16-05 would have increased the density allowed, from 60 houses to 340 houses, on a rural parcel of land in the Keystone area, outside the Urban Services Area boundary, with sensitive wetlands that flow into Brooker Creek. It flies in the face of the Keystone-Odessa Community Plan which seeks to preserve the rural agricultural character of their community.

Comprehensive Plan Amendment 16-06 was even worse, because it applied to the whole county, not just one parcel of land. It would have allowed any developer to multiply the density times 3 on any rural parcel that includes sensitive wetlands (!!!), if the parcel was outside the Urban Services Area (!!!), as long as the developer brought in urban sewage systems.

This would have conflicted with these 9 Community Plans:

Video of the whole BOCC hearing. Use Safari browser with Silverlight plugin. The Comp Plan Amendments hearing starts at 1:57 (after the marijuana hearings).