Will the county allow sewage dumping on the Little Manatee River? Let’s say NO! 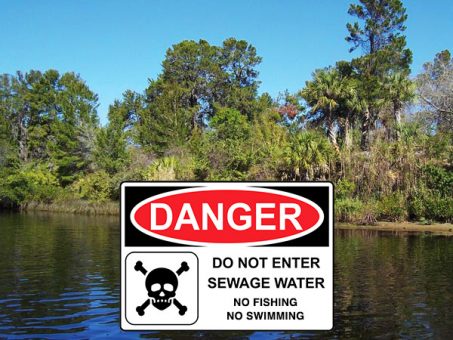 UPDATE #2: We won!! Chris’s Plumbing has WITHDRAWN their application! See the next post for details.

UPDATE #1:  Chris’s Plumbing has changed their application to sewage-effluent spraying (instead of sewage-solids spreading). It’s still horrible. In fact parts of the plan are even worse now.

This post has been revised throughout to address the new proposal.

Chris’s Plumbing Service is asking Hillsborough County to let them dump effluent from human excrement, commercial sludge, and restaurant grease on the banks of the Little Manatee River’s wetlands.

Chris’s Plumbing Service runs a huge commercial septic operation, pumping waste out of portable toilets, residential and commercial septic tanks, and restaurant grease traps. They have applied for a special use permit to spread 100,000 gallons a day (!!!) of sewage effluent across 36 acres of a site that sits on the Little Manatee River system. A large part of the site is wetlands that flow right into the river.

This toxic waste will obviously end up in the river — and from there it will flow into Tampa Bay. It can cause devastating fish kills and human health dangers.

Several disease organisms have been shown to survive the type of chlorine treatment that Chris’s Plumbing is proposing. 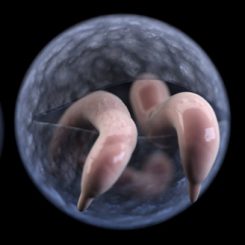 Cryptosporidium is protected by an outer shell that allows it to survive outside the body for a year or more, and makes it very tolerant to chlorine disinfection.

Parasitic species that are not killed by chlorine treatment include Cryptosporidium, Endamoeba, Giardia, and eggs of parasitic worms. These microscopic parasites have a tough outer shell so they can survive for months in surface waters & rivers — fresh or saltwater, before infecting a human or animal. Some can survive long periods in soil before moving into water. These organisms make humans & animals sick. They mostly affect the intestines, but some can spread to other parts of the body, including the liver, lungs & brain. You can get these diseases by swimming in polluted water. Only ONE microscopic cyst is all it takes to multiply in your body and make you VERY sick. (See references.)

Chris’s Plumbing’s effluent treatment is far below the standard of our city & county wastewater treatment plants (contrary to the company’s claims).

Chris’s Plumbing’s plant would treat his sewage wastewater only to Class III “basic-level” disinfection (according to county staff’s letter to the applicant, dated 7/26/17).

The county’s own reclaimed water (treated to Class I standard) “is not suitable for human consumption, nor is it allowed for use in pools or hot tubs,” according to the county’s Reclaimed Water web page. Contrary to the company’s statements, their effluent is not at all similar to the City’s gray water being sprinkled on a golf course where people drive golf carts and walk around in golf shoes. It is toxic waste being firehosed on the bank of a river where people swim and fish — 100,000 gallons a day. If Class I reclaimed water isn’t allowed in a chlorinated swimming pool, then Chris’s Plumbing should not be allowed to dump 100,000 gallons per day of Class III effluent near wetlands that flow into a river where people swim.

The county also notes that their Class I reclaimed water can be harmful to some plants, such as roses & azaleas. So it seems likely that Class III effluent will harm some of the river’s plants and fish, and the wildlife & birds that eat those plants & fish. Also, the chlorine used in Chris’s Plumbing’s treatment is harmful to the river’s aquatic life. The nitrogen, chemicals & dissolved solids in sewage effluent are also bad for the river & bay. Other concerns are pharmaceuticals in sewage, and heavy metals and other chemicals in restaurant grease and commercial sludge.

Effluent sprayed onto a site can enter nearby water bodies & wells in several ways:

The Little Manatee River, and its associated tributaries, is an undammed, tidal river system that floods frequently. It overflows its banks with every summer storm, especially in the river’s upper reaches where this site is located. Hurricanes bring the floodwaters much higher.

Chris’s Plumbing’s site plan includes a ridiculously inadequate 30-foot setback from the wetlands. This undammed river system is extremely dynamic, so the shape of its wetlands are constantly changing, its oxbows and bends are constantly shifting, and heavy storms erode its banks. The regular floods, rainwater runoff, and the dynamic action of the river and its tributaries, along with the enormous amount of pollutants dumped daily, all but guarantee that the huge volume of toxic waste dumped on this site will wash into the river, and flow out to Tampa Bay.

Pollution will also leech into the river through the groundwater, which is very close to the surface. The county’s EPC inspection revealed that the water table is 8–10 inches below surface toward the west, and 18–20 inches on the eastern part of the site — (see this document). This refutes Chris’s Plumbing’s false statements in their application, and to the community at their meeting on August 1, that the water table is 60 inches below the surface. 100,000 gallons per day of effluent sprayed on 36 acres will quickly saturate the soil, then leech into the groundwater, and migrate into the river.

Miles of public lands, purchased, restored & maintained with taxpayer dollars, would be impacted by the toxic waste flowing into the Little Manatee River. 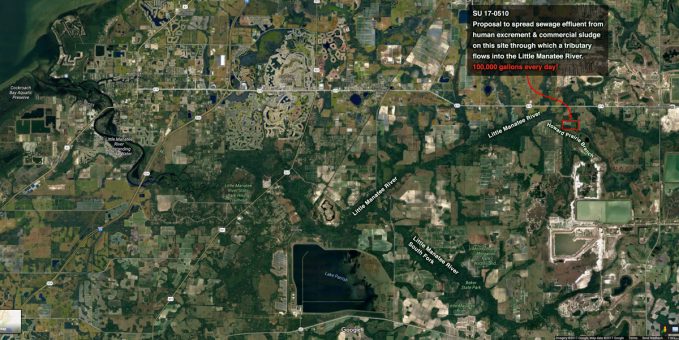 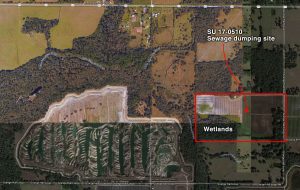 Click these images to view the site location larger.

My family & friends swim in this river. Children water-ski here. Many people, residents and tourists, fish in this river — and eat the fish they catch.

These waters provide important nursery habitat for many of Tampa Bay’s prized fish such as snook, redfish, blue crabs and tarpon. I’ve seen diamondback terrapins, seahorses, otters, manatees and dolphins here. Many species of birds wade & fish in the river and its wetlands. 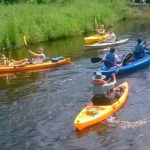 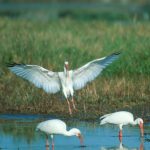 VITAL HABITAT: Wetlands in Hillsborough County are among the key U.S. breeding sites for the white ibis. 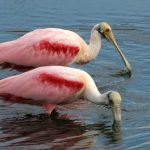 Spoonbills feed in Cockroach Bay Aquatic Preserve which includes much of the Little Manatee River. 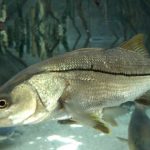 Snook is one of the prized fish of the Little Manatee’s flats system.

The Little Manatee River is wonderfully wild and pristine. It is designated an Outstanding Florida Water, and many miles of it are included in the Cockroach Bay Aquatic Preserve. It would be unconscionable to poison it.

3 things you can do:

1.) Contact your County Commissioners and ask them to insist that EPC oppose this.

Reference “Chris’s Plumbing’s latest plan for effluent dumping on the Little Manatee River” at the top of your message or in the subject line.

You can also email the EPC staff.

2.) Email the Land Use Hearing Officer (LUHO) who will make the final decision.

The commissioners do not decide this matter. The LUHO renders the decision after one public hearing. Our best hope is that EPC, county staff, and other certified experts will provide comment that will convince the LUHO to deny this application.

Address your letter to “Land Use Hearing Officer for SU-17-0510.” Ask him/her to deny application SU 17-0510, for the reasons above, and/or any other reasons you may have — the more scientific & objective, the better.

Start out with something like this: “I understand that Chris’s Plumbing has changed their proposal to sewage-effluent spraying (instead of sewage-solids spreading), and I am still adamantly opposed.” This is important because the applicant will try to say that most of the letters were opposed to the original plan to spread solid sewage on the site, not the new plan to spread liquid sewage effluent on the site.

Your letter must be received 2 business days prior to the hearing, or presented at the hearing (Nov. 20).

Agenda will be posted at this link.
Check this agenda before you go, to see any last-minute changes — look for SU 17-0510. (The date has been postponed before, and could be again.)

You don’t have to speak — your presence will speak volumes when we all stand up together for a moment to show how many of us there are. If you do speak, please be very brief (1–2 minutes) because they only allow 15 minutes TOTAL speaking time for ALL the people in opposition. We do have expert witnesses coming, and it is important that they get time to testify. It’s a good idea for everyone to bring your comments in writing, so you can make a very brief statement, then hand in the written details, without taking up time with a long speech — this is what I plan to do. Any group should designate one spokesperson. Factual testimony & evidence will convince the hearing officer more than emotional pleas.

To see all the documents in this case file, go to pgm.hillsboroughcounty.org
Login/User ID is “public,” password is also “public.”
You must have popup windows enabled.
Click “logon.”
In the popup menu window, click “Document Repository,” then Click Query.
(You may get an error message here, just ignore & click out of it).
Where it says “tracking #,” enter the case number: 17-0510.
Click “query.”
Select the file, and click “open.”

Cryptosporidium is protected by an outer shell that allows it to survive outside the body for long periods of time and makes it very tolerant to chlorine disinfection. While this parasite can be spread in several different ways, water (drinking water and recreational water) is the most common way to spread the parasite. Cryptosporidium is a leading cause of waterborne disease among humans in the United States.
— U.S. Centers for Disease Control & Prevention (CDC)

Cryptosporidium can survive in surface waters, and seawater, for a year or more.
— U.S. National Institutes of Health

Giardia can survive for months in the environment.
— U.S. Centers for Disease Control & Prevention (CDC)

Endamoeba histolytica can spread to other bodily organs, including the liver, lungs & brain.
— U.S. Centers for Disease Control & Prevention (CDC)